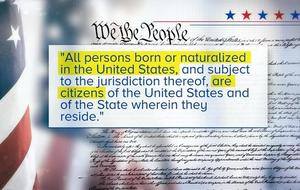 President Trump, seeking to limit immigration to the U.S., is set to challenge a 150-year-old constitutional standard that anyone born in America is an American citizen. Mr. Trump told “Axios on HBO” that he plans to sign an executive order to “remove the right to citizenship for babies of non-citizens and unauthorized immigrants born on U.S.-soil.” “How ridiculous, we’re the only country in the world where a person comes in, has a baby, and the baby is essentially a citizen of the United States for 85 yea